We are happy to announce that the BMJ paper: Towards Evidence Based Research is now available in Italian thanks to the GIMBE Foundation. The Italian version is published in Evidence – GIMBE’s own open access journal. We are extremely grateful to Nino Cartabellotta and his colleagues for making this possible.

The EBRNetwork would like to acknowledge one of the giants on whom shoulders we stand. Eugene Garfield was a giant in publishing metrics, including writing about the failure to cite prior research for which he coined the terms ‘bibliographic negligence’ and ‘citation amnesia’. Tributes may be found here:

Obituaries:
The first was published a few days after Gene passed away with personal reflections by Ton van Raan. The second by Paul Wouters was published in Nature.

It’s estimated that 85% of medical research is wasted.

The waste comes from asking the wrong question, bad design or poor reporting – and in a study carried out with colleagues from around the world, and published online in The Lancet, we found that at the root of this issue were funding bodies not taking responsibility for the efficiency of the research they have used public money to fund, and governments not holding those funding bodies to account.

We worked through the websites of 11 national research funders which distribute funds in the UK, Australia, Canada, US, Germany, France, The Netherlands, Denmark and Norway. The research funder we investigated in Australia was the National Health and Medical Research Council (NHMRC).

We found variety and weaknesses in approach across all 11 funders, including: the domination of some grant committees by academics, which is a problem because the priorities of patients, clinicians and policymakers can differ from those of researchers, and the fact that practice and policy decisions were often made without the systematic assessment of existing research evidence.

There were instances of good practice: some funders, such as the National Institute of Health Research (NIHR) in the UK and ZonMW in The Netherlands have already addressed one of the weaknesses with extensive involvement of members of the general public; and the only funder to require reference to relevant systematic reviews in all funding applications is NIHR. The latter is a key issue that the Evidence-Based Research Network is advocating and working on.

We got a lot of attention on social media. Simon Denegri wrote a blog post highlighting it. 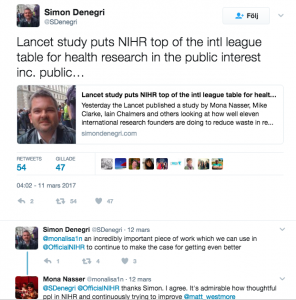 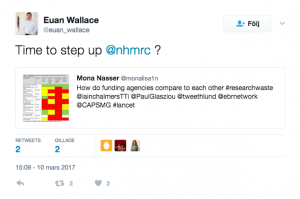 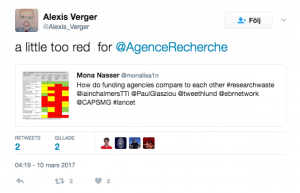 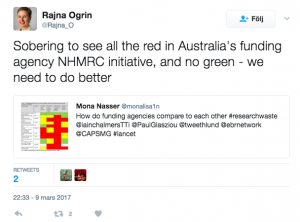 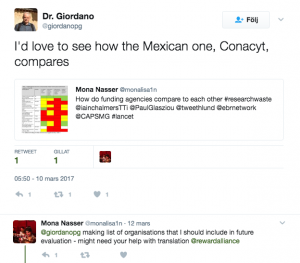 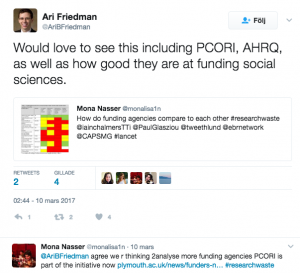 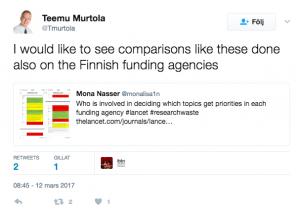 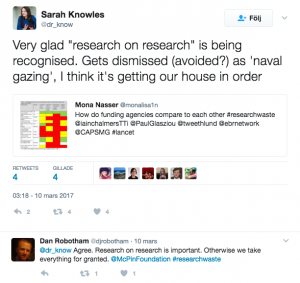 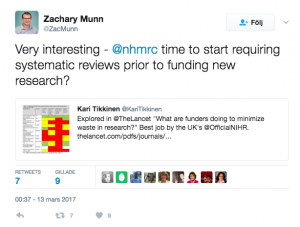 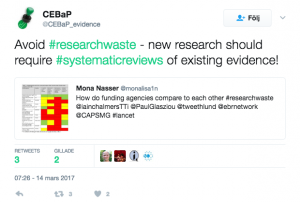 One person raised the importance of this for patients 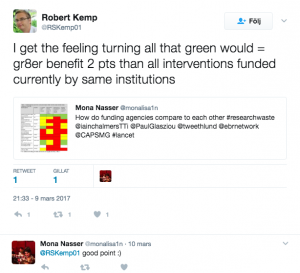 Some suggested new ways that we describe it – evidence-waste medicine! 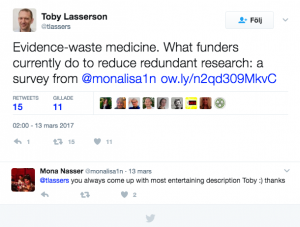 Other related links on the topic

Op Ed in the Australian journal online opinion “Medical research funders, governments and research waste – are taxpayers getting ‘bang for their buck’?”

On November 8th the EBRNetwork and Western Norway University of Applied Sciences arranged the seminar ”Redundant and dangerous health research – how can you support better research practice?” At the seminar, the consumer statement made in the BMJ article Towards evidence based research, written by our EBRNetwork colleagues, was discussed at length. It states:

“Before agreeing to participate in research, patients should demand that research projects have been informed by systematic review of what is already known”.

The discussion concerned the implications of this statement for consumers, as they may not immediately be clear.

The BMJ article is about changing research practice. The consumer statement is simply a statement about how consumers can help to achieve this important mission. If it becomes standard practice that consumers ask for systematic reviews researchers will be encouraged and eventually lead to a necessity to use systematic reviews.

Tone Hansen, chairwoman of the Norwegian Blood Cancer Association, participated at the Bergen seminar and made a very important point. Does the consumer statement imply that consumers should not agree to participate in research projects if a systematic review does not exist? The answer is no. Not all research have been conducted before and there will be cases when systematic reviews do not exist. The problem arises when researchers do not use systematic reviews that do exist. We want all consumers to know if researchers have completed their homework.

It is important to note that we are not in a position to tell consumers when or when not to participate in research. That is ultimately an individual choice. What we want is for all consumers to be able to make well-informed decisions. They should be given all the facts, and make decisions based on those facts. The problem, that we want to highlight, is that when researchers fail to refer to systematic reviews, or cite previous research, they are not providing all the facts.

“Before agreeing to participate in research, patients should ask for the systematic review(s) that has informed the research project”.

We welcome all comments and/or suggestions to this new statement.

We have 100 members! Thanks to everyone who is supporting us!

If you are not a member yet sign up here 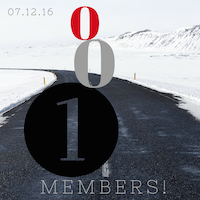 We define the researcher as being “evidence-based” if he/she systematically reviews what is already known before embarking on a new study. Not being evidence-based as researcher is unethical, unscientific and wasteful. In order to define and promote the concept of “Evidence-based research” (EBR) we have just published a statement in The BMJ describing the implications of EBR for researchers, funding agencies, journals and other key stakeholder groups. The paper’s main take-home messages are that a systematic review of relevant evidence can establish whether the proposed research is truly needed or not; inform the optimal study design; and help to put new results into the context of existing knowledge.

Interesting new blog by Shona Kirtley about the role of librarians and information specialists in helping to reduce research waste.

The European Union, more specifically the Marie Skłodowska-Curie Actions, are looking for young early state researchers (PhD students) within the area: “Research on Research”. This is an emerging new scientific discipline that aims to reduce waste in research and increase research value. The announcement from Methods in Research on Research (MIROR) points out that tens of billions of Euros are wasted each year on studies that are redundant, flawed in their design, never published or poorly reported. The public is the main victim of this waste and reducing waste and increasing value of research represents a major societal challenge. MIROR will train 15 PhD students to become the future generation of high-level scientists to develop innovative methods of Research on Research. This is a fantastic opportunity to undertake a PhD within a European network that offers an innovative training programme and very competitive stipends. The EBRNetwork are very happy to forward this announcement. For further information visit http://miror-ejd.eu/.

Principles of collaboration on development of automation in systematic reviews released.

Drafted by members of International Collaboration for the Automation of System Reviews (ICASR) at their first meeting, 2 October 2015, Vienna, Austria.

The opportunity to comment on the Bergen Statement has passed.

Thanks to everyone who participated.